Renovations Almost Completed at The Village Center in Westport, CT 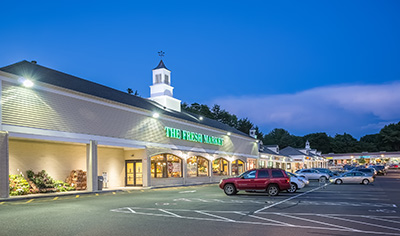 WESTPORT, CT – August 17, 2010 –With the final stages of a major renovation fully underway, The Village Center of Westport has a new look and is quickly becoming a new chic shopping destination in Westport. The Village Center, comprised of four buildings on both the north and south sides of the Post Road in Westport, began renovations last fall in conjunction with the arrival of The Fresh Market, a North Carolina-based grocery chain, as the anchor tenant at 605 Post Road East. In addition to extensive interior renovations to the 22,600 square foot space formerly occupied by Shaw’s Supermarket, the building on the northern side of the road underwent a complete exterior renovation, boosting a new façade, upgraded lighting, additional landscaping, and parking improvements.

This summer it has been the southern side of the road’s turn for a transformation with a complete exterior rehabilitation.  The landlord is in the process of installing new paving and lighting in the rear of the building, creating additional parking and new and improved traffic patterns.  “These improvements have generated tremendous interest in the Village Center, with numerous new tenants and current tenants eager to stay put.  There is a buzz around the center.  In a time when there is doom and gloom and uncertainty in local papers about the economy and retailers, the center has experienced great success.  The landlord recognized the need to rehab the shopping center to gain and retain tenants and increase occupancy levels, and it has paid off,” said Brett A. Sherman, CCIM, senior vice president of Angel Commercial LLC, which represents the owners of the center.  “In addition to The Fresh Market, new tenants include The Little Gym, LCR of Westport and Vincent Palumbo Salon is set to open in September in the new 4,200 square foot salon. The former principal of Peter Coppola Salon, Vincent Palumbo chose the Village Center for its prime location on the Post Road and was impressed with the extensive renovations being done. The improvements to the rear of the building now give clients two convenient entrances to the salon. Current tenants are also very excited about the improvements.  Wishlist recently expanded, nearly doubling their space, and Sam Sloat Coins’ signed a long-term lease extension as well. Currently, there are only a few remaining spaces available throughout the entire 90,000 square foot shopping center.